Fly Me To The Moon (episode 11 of the podcast) 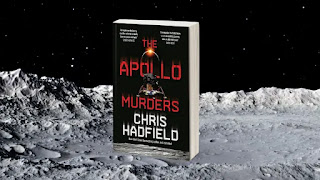 In the latest episode of the Science Fiction 101 podcast, we review a new book. The Apollo Murders is a novel about space - written by an honest-to-goodness real-life astronaut!

The author, Chris Hadfield, has flown on the Space Shuttle and on Soyuz, worked on the Russian Mir space station, and commanded the International Space Station. You can't get more astronaut experience than that.

Hadfield has also written books before, but until now has focused on non-fiction. His best-selling book prior to this one was the autobiographical An Astronaut's Guide to Life on Earth. But now he turns to fiction, with a thriller set during the Apollo era.

In the podcast, regulars Colin and Phil are joined by Peter Kuskie to review the book. In an earlier episode Peter had sent in a fiendish quiz which he hoped would stump Colin. Peter's guest appearance this time is a chance for Colin to turn the tables, with a Jeopardy-inspired quiz.

If you've been tempted by The Apollo Murders, listen to our review to see if it's the kind of thing that appeal to you. But do be warned: here there be spoilers! Or if you've already read the book, let us know what you think of it by posting a comment below.

We hope you enjoy this new episode!

Popular posts from this blog

It's About Time - episode 2 of the podcast!

March 21, 2021
Here's our new podcast episode, in which Phil and Colin consider the persistence of the concept of time travel. And we have a little guess-the-mystery-sound competition, albeit with no prizes to speak of other than (a) some small kudos and (b) a shout-out on our next episode. (Post a comment if you can identify the sound.)     Among our discussion topics this episode: " Science fiction " or " sci-fi "?  Phil's Facebook post sharing the hard-to-find James Gunn recommended-reading list. Colin's other podcast, Take Me To Your Reader reaches 100 episodes. Octavia E. Butler's Kindred ... and the planned TV adaptation of it.  Danish Netflix series The Rain . Elizabeth Bear's short story " Dolly " , and the news report that it is being filmed . J.Michael Straczynski's pledge to publish Harlan Ellison's legendary The Last Dangerous Visions .   Podcast platforms carrying Science Fiction 101
Post a Comment
Read more

June 20, 2021
We take to the air once again, and this time Phil wreaks his revenge on co-host Colin with a diabolical quiz! How will you fare when faced with questions from the Gollancz SF Masterworks quiz? Also in this episode we review the short story that just won the Nebula Award from the Science Fiction and Fantasy Writers of America, plus one of the leading runners-up. And we do our usual run through the past, present and future of science fiction. We hope you enjoy the show: listen below and let us know what you think. Or pick us up on your podcast app - scroll down to see links to all the podcast places that carry us.       Show Notes The Gollancz SFMasterworks quiz is online here: https://www.gollancz.co.uk/science-fiction/2012/11/20/the-gollancz-sf-masterwork-quiz/ The list of Nebula Award winners for works published in 2020: https://nebulas.sfwa.org/award-year/2020/ File 770 's handy list of where to find all the Nebula free reads online: htt
Post a Comment
Read more

Looking back to the future...with 2001: A Space Odyssey

September 09, 2021
After a short break, we're back with a brand new episode of the Science Fiction 101 podcast! This time we  look at 2001: A Space Odyssey , the classic 1968 film directed by Stanley Kubrick , and the novel written by Arthur C. Clarke . We also mention Clarke's Lost Worlds of 2001 , in which the author reveals some of the left-over bits of story development which got dropped from the film and the novel. And various film andTV properties possibly inspired by 2001, such as: Moon (2009), Contact (1997), Space: 1999 (1975-7). Then Colin springs a quiz on an unsuspecting Phil. A perfect match for the audio medium, it's a quiz based on images and colours! And Star Trek . Perhaps you'd like to try it yourself ? And we finish with our usual round-up of recommendations of past, present and future science fiction. Colin points us to Andre Norton's Witch World series. Phil recommends the 1985 Aurum Film Encyclopedia Vol 2: Science Fiction , edited by Phil Hardy. Other
Post a Comment
Read more